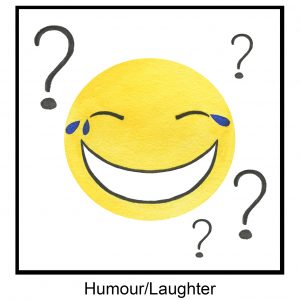 To start our research we looked at what makes us laugh and how we can share our sense of humour – especially without using words.

funny to see what would happen. Some children and young people drew what they liked about the workshops:

In our workshop we did lots of different things that we thought would be funny to see what would happen. Some children and young people drew what they liked about the workshops:

Why Humour and Laughter?

I have enjoyed working with children and young people for many years. As a practitioner I greatly believe in the importance of having fun and I always find myself being a bit of a clown to make sure that I get the children I work with to smile and laugh. I wanted to explore this further in terms of academic research and I started by looking at how people performing for children with learning disabilities draw on comedy and humour to get a response from their audiences. After this I also worked on a research paper with Professor John Vorhaus and Dr Gill Brigg in which we analysed how we engage children with Profound and Multiple Disabilities (PMLD) while focusing on laughter. We looked at what laughter may reveal about the child’s personality and cognitive abilities as well as the possibilities of communicating across profound differences.

What stood out for me in terms of this paper, and what I noticed from analysing how I interact with children, is how trying to get someone to smile fits within the structures of a research process: you make an assumption about what may be funny (hypothesis), you do whatever you think may make the child laugh (experiment) and you focus on the outcome: a child either laughs or not. I also found it interesting that it was not just me who was experimenting with humour in this way because it became clear that the children around me are constantly testing and experimenting with their environments and the people around them. Children were drawn to, or actively looking for, things that would make themselves or others smile. On a day to day basis I could find children, and accompanying adults, to be experimenting with objects, funny faces, sounds, physical sensations as well as ‘the rules’.

My idea was that humour and laughter may be a very useful tool when you want to invite children and young people to participate in research because:

I started this project by finding schools that would like to participate and found two in Staffordshire. The schools selected the classes they would like me to work with, after which I sent out questionnaires and information forms to the relevant parents participating in the project. I wanted to find out what made the children and young people laugh to help to create the drama workshops. The idea was to collect some of the parents’ ideas and to pass these on to the practitioners of Borderlinesat the New Vic Theatre. I hoped that with this information they could devise workshops that were relevant and suitable for the young collaborators. I was also interested in what parents thought about humour at school, the opportunities they have to share their own and their child’s view as well as what they think of cultural activities available for their children. Finally, I wanted to know what kind of creative activities the children and young people as well as the parents like to do in the future.

Meeting young participants and interviews with parents and teaching staff

To make sure that the workshops were right for the young participants it was also important to meet and interact with them.  With some groups I had in-class conversations about what they thought was funny and what they would like to do during the drama workshops. In other groups, I read a sensory story called ‘What is funny?’ so I could also see for myself what made the children and young people laugh. During the story we did very simple activities: throwing soft little balls in the air, looking at puppets and tricking the teacher (by tipping a bowl of confetti over their head).

With all the information collected, the artists from the New Vic created the workshops. I went back to the schools with a social story that explained what we were going to do. A social story uses pictures and minimal words to show children what they can expect in terms of changes to their routine. It also reassured the young collaborators that they did not have to take part in the workshops and that they could leave (and re-join) if necessary. At the first school we worked with two groups of PMLD students. At the second school we had three groups of mixed abilities and different ages. Each group took part in the 40-minute workshop three times. We visited the schools on a Monday, Wednesday and Friday.

Because the groups were so different, the workshops had lots of different elements.

The workshops for younger participants and students with PMLD had more sensory elements. We had musical instruments, scarfs, balloons, red noses, hats, ‘messy play’ (pretend food) and a parachute.

The other workshops had different drama activities. For example, in one game we had to copy each other’s movements. In another, a student had to trick their friend and ‘steal’ their seat on a chair. Some students performed a short piece in which they found a magic glove. They pretended that this glove took control over their hand with some very funny results.

I videoed these workshops to detail what happened and examine how the collaborators interacted with each other. Analysing the footage and seeing how much fun the children and young people had during the workshops was great but also very intense work as I wanted to pay attention to the intricate and subtle ways collaborators communicate using words but also through, for example, their facial expressions and eye movements.

I also asked the children and young people for feedback. Some helped me by drawing what they thought was funny and I will show some of their pictures to discuss some of the research findings. 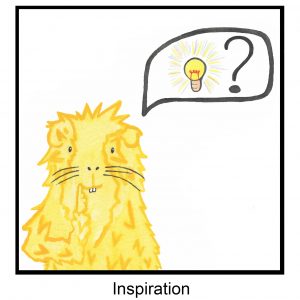